If you follow me on twitter, you were privy to this break down in real-time, but for those of you who do not, here’s a totally unbiased personal narrative featuring the fine folks at US Airways.

MCO to BNA via CLT

I arrived at the airport on Christmas day, an hour before my flight as I usually do (sometimes cutting it a bit closer ;)).  The US Airways desks had about 4 lines leading up to the self check in computers.  I drug my luggage to the shortest line where just one guest was in line ahead of me… and there I sat, and sat, and sat as lines on either side of me checked in and went pleasantly on their way.  I was faced with that decision we’ve all had to make, bail and risk losing my spot in line, or tough it out for use one more guests.  Here’s where I made my first mistake.  I waited it out.  I mean, how long could it take?  It’s Christmas day, it’s not even crowded!  Unfortunately the one group in front of me was a dad, checking in with his unaccompanied minors… quite the process apparently.

Now, I’m no stranger to arriving a bit late at the airport, 45 minutes before your flight is typically the cut off for checking a bag, and even then I can usually talk my way in.  I got to the computer with 39 minutes to spare.  Unfortunately, the lady monitoring my particular computer was one of those older ladies that’s really good at their jobs.  You know the ones. We’ve all worked with them, they have severe faces and names like Judy or Linda.  And no matter how much leeway they have, or how insignificant their decisions, they will make an example of you.  So there I was, fighting with an old lady on Christmas.  Needless to say, I was on a way later flight.

I’m willing to accept that this part of my inconvenience was probably my fault.  I maybe should have gotten their earlier, or as Judy or Linda put it,

“It’s 6 minutes!  Are you telling me that if I had gotten in any line but yours I would be on that plane right now?”

“We recommend you arrive at least 2 hours prior to your flight.”

Nothing to be done except settle in at the airport bar and enjoy my Bloody Mary Christmas (I’ve tried to make this happen.  Hasn’t caught on, but I stand behind it.) 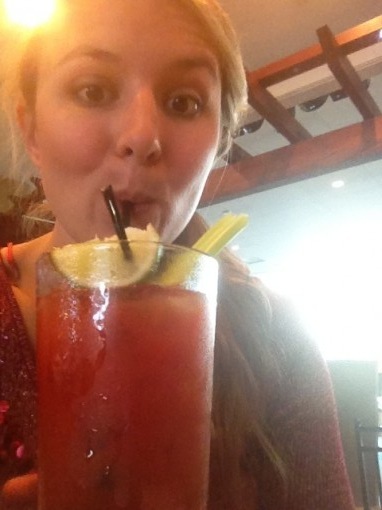 So, defeated and tipsy I boarded my much later flight without further incident… until we landed…and waited…and waited…and waited some more before the pilot informed us that we could not deplane due to a broken jetway that was stuck “7 or 8 feet” from the plane.  Waiting for jetway maintenance on Christmas, classic.  Once we got off the plane it was time to be stuck in Charlotte on my never-ending layover.  Bloody Mary Christmas quickly turned to Bloody Marys Christmas, and then to Overpriced Tiny Bottle of Champagne Because I Deserve It Christmas, followed by a brief highlight of Chipotle Vodka and Pineapple Christmas. 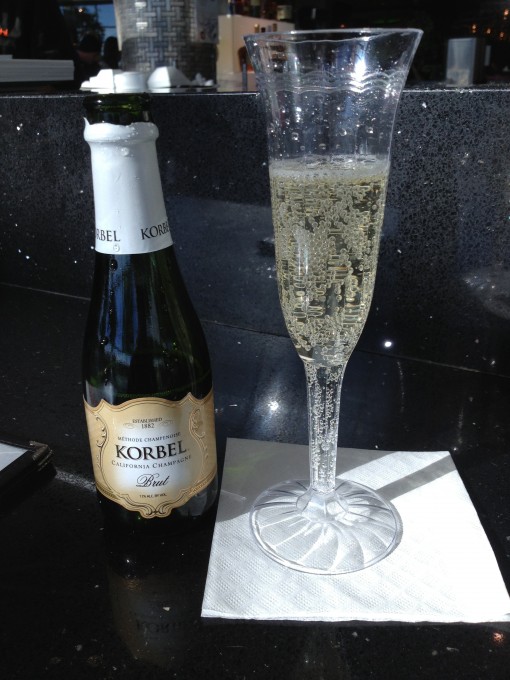 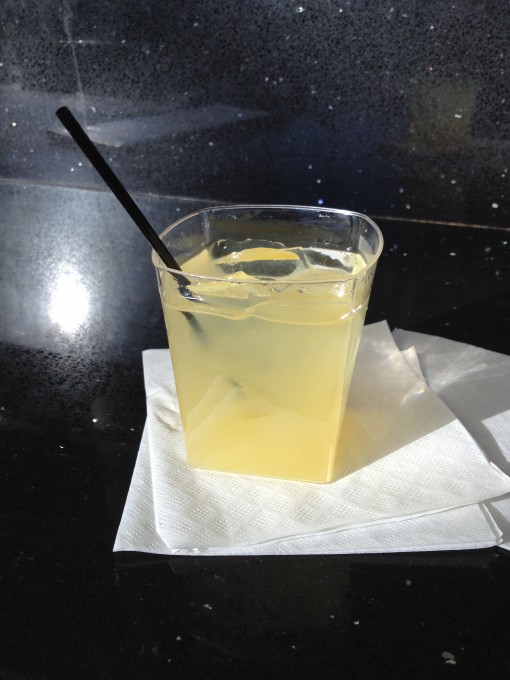 I became well acquainted with the First In Flight Bar at the Charlotte airport, which was actually pretty cool. 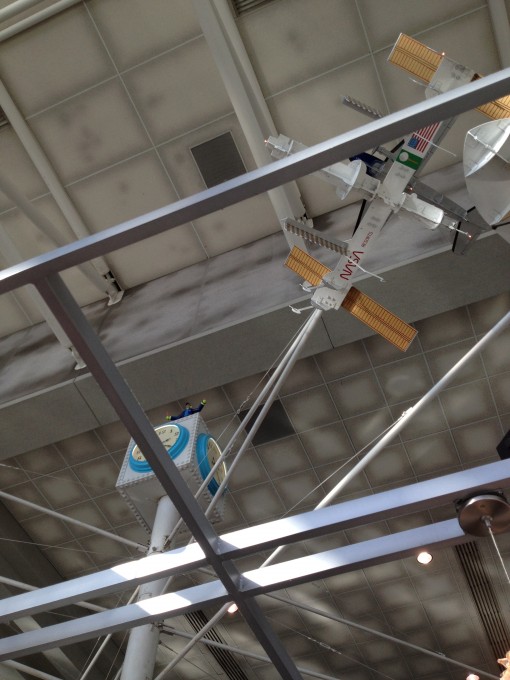 Although, I did spend enough at the bar to more than make up for the money I saved by not flying direct on Southwest, not to mention I would have been there somewhere near on time.

My “I’ll fly on Christmas, it’s cheaper and I’ll be in around 1:30pm so I’ll have pretty much the entire day” flight got in around 6pm, and I had a suitcase full of presents for my family that looked like this, 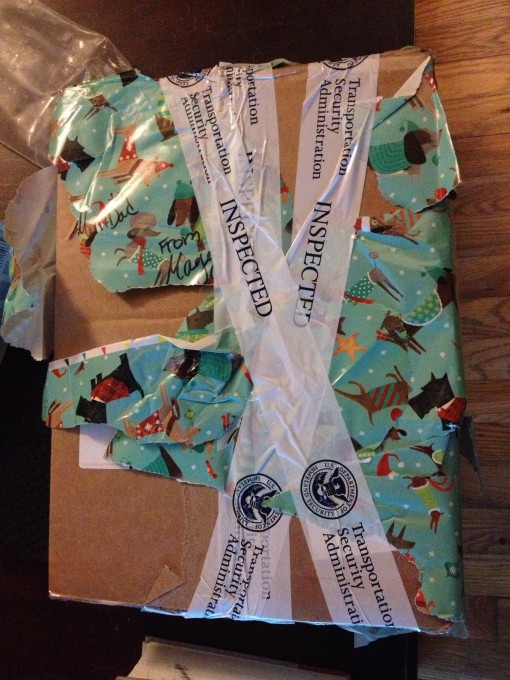 courtesy of TSA.  I left it like that.  Merry Christmas Everyone!

And that was the pleasant leg of the flight.

BNA to MCO via CLT

Now, because I’d learned my lesson from Judy or Linda, I arrived for my 11:10am flight at 9:30am.  I didn’t have time to get breakfast with my family, but we did have time for rushed goodbyes at Starbucks before going through security to make sure I was on time for my “on time” flight.  Now, stuff happens, I know that, but here’s what the board at the gate looked like at 2:18pm (and up until we actually left at 4pm.) 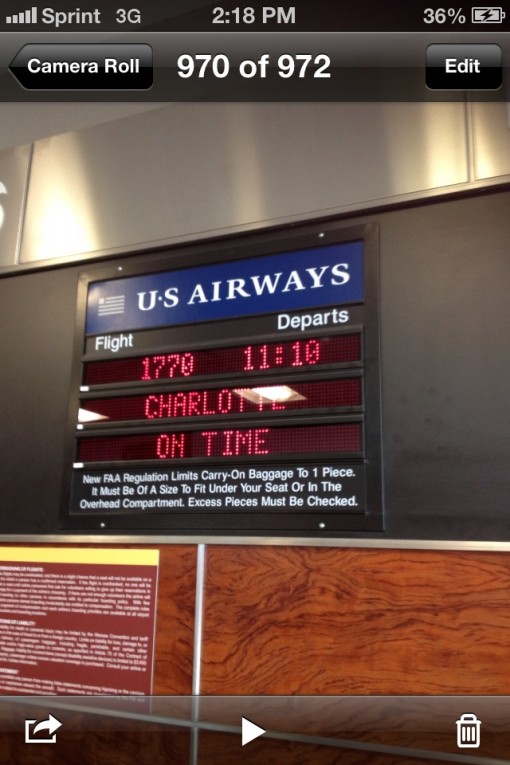 Apparently there was a problem with a tire.  I know this because after hours of not boarding and not being updated as to why we were not boarding a very Nashville announcement informed us that “Our maintenance ‘fellas are having a difficult time gettin’ the tire off the plane”.  By this time any hope of making my connecting flight in Charlotte had flown out the window and landed at the feet of the two maintenance workers outside of the plane sharing a manual and quizzical looks.

The lack of departure updates made it impossible to know if I had time to find a bar, so instead to pass time and sooth my own frustration, I started angry tweeting the fine people of @usairways.  I even made angry delayed flight twitter friends with a 15-year-old girl stuck on another US Airways flight.

At this point I got the “@usairways in now following you” tweet.  Yikes.  I’ll admit, this twitter rant was mostly for my benefit, but @usairways reading them could mean getting something done right?   Wrong!

(by the way, I totally should have!  $215 would have been a small price to pay, but at this point I was already in trouble with work so I figured I may as well tough it out.)

That’s right, at 4:23pm I had boarded, but not yet taken off for my 11:10am flight.  To add insult to injury, the 2:25pm flight to Charlotte from Nashville had boarded and taken off from the gate next to us hours ago!

I did finally make it to Charlotte, at 6:10pm, just in time to run to the gate for my 6:25pm flight and be told I am too late to board…. while they called all the standby passengers.  It was explained to one of my delayed flight buddies that, even though we have a paid ticket with an assigned seat for this flight, “most of these stand by passengers were delayed from earlier flights too.”  While I don’t doubt that for a second, it still doesn’t instill confidence.  We were directed to guest services where the person next to me was informed. “We used to give travel vouchers, but people complained about the amount so the only way to stop it was not to give them out anymore.”  Solid customer service again. I was rebooked on the 8pm flight, which gave me plenty of time to once again take my frustrations out on twitter. 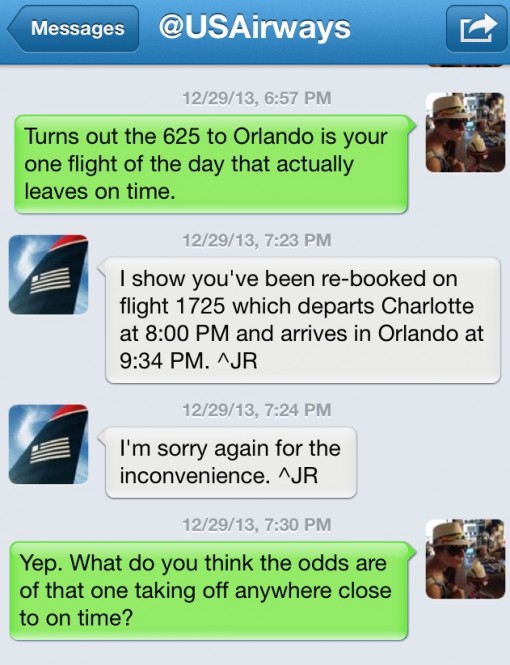 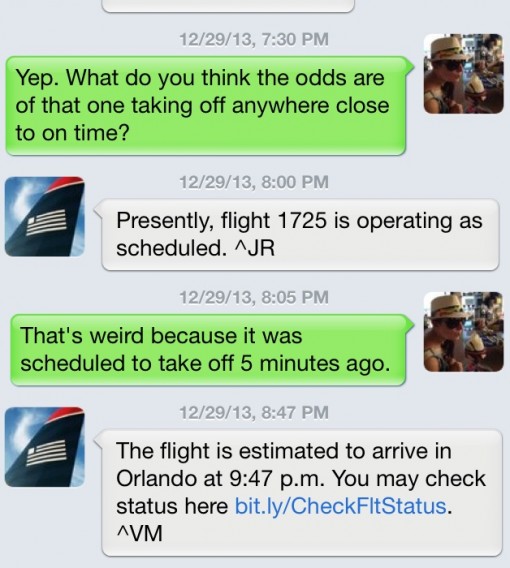 means that they will keep me posted as to the status of the flights I’ve already had to rebook.  Helpful.

This took a while as many other passengers also paid an absurd (any baggage fee is absurd, still mad about it) baggage fee to have their bags not arrive.  Turns out my bags were on the next flight to Orlando, which “is scheduled to get in at midnight, but shows that it hasn’t left yet”.  That sounds right.  So my bag would be delivered to my home sometime between 8am and 11pm tomorrow.  Perfect.

I’m not entirely sure what was happening to my bags in the hour and half between watching my seat being given to stand by passengers and finally boarding a flight, but my bag was waiting for me when I got home from work on Monday, with an ironic “rush” sticker.

And so my saga ends. 9am-11pm, Nashville to Orlando, bags the next day, 0 compensation and hardly an apology to speak of.  Something to think about when choosing and airline for your next flight.  Happy Holidays Folks!

4 thoughts on “How US Airways Stole Christmas”