Cruises out of Florida are incredibly convenient if you live here.  Really, it’s the cheapest way to travel.  Where else do you get transportation, lodging, and food (lots and lots of food!) for around $100 a night (sometimes less)?  So naturally, those of us that live near a port cruise as often as possible and most of those cruises stop at Nassau.

Nassau.  Everyone that’s been has an opinion, and most of them are not glowing.  You’ll hear from many people that the only thing worth doing in Nassau is going to Atlantis and staying at the resort for the day.  In fact, an increasingly popular option is just to stay on the boat.  I’ve been to Nassau a handful of times and this option still breaks my heart.

I’ve been to Nassau, I’ve been unimpressed, I’ve been even a little grossed out, but I still get off the boat under the assumption that I’m missing something. Call me an optimist.  I’m pleased to say that this is the best time I’ve ever had in Nassau.

So this time when we pulled into Nassau Port, many people stayed on the boat to take advantage of the shortened water slide line, and the rest of us set out on a fools errand to help our friend, Kelsey find a list of prescription drugs her parents assured us we would have easy access to in Nassau. 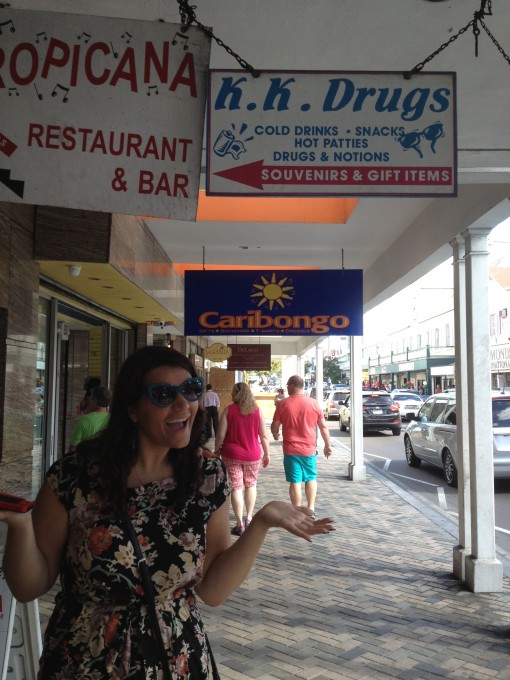 After a little wondering around, soliciting help finding illegal drugs from several public officials, and what I’m pretty sure was the stateside equivalent of asking for heroine at a CVS, most of the group had had enough Nassau and headed back to the boat for water slides and hot dogs.

Only 3 of us remained, determined to have a good time in Nassau.  I’m not going to tell you it was easy, it wasn’t.  It took determination.  A lot of the town is a giant tourist trap, everyone wants you to tip them for everything, and children in diapers roam the streets trying to sell you things they’ve made of straw.

Here’s how we made the most of our time in Nassau.  First we went on a “free gift” crawl.  Many of the jewellery stores near the port offer a free gift for boat passengers who stop in.  We scored 2 cheap necklaces and these sweet hats! 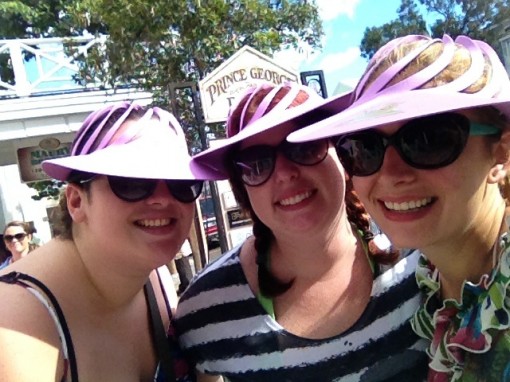 Then we set out to find the Queen’s Staircase, a historical attraction that Tracy, the only member of our group capable of doing any research, had read about prior to our arrival.  Out side of the staircase we were forcibly included in a tour group that I was more than a little concerned would end in our being herded onto a bus and delivered to a different ship, but we were able to break free and enjoy the staircase on our own.

The staircase was located in a cool and quiet tropical alcove, which seemed very unlike the rest of the island. 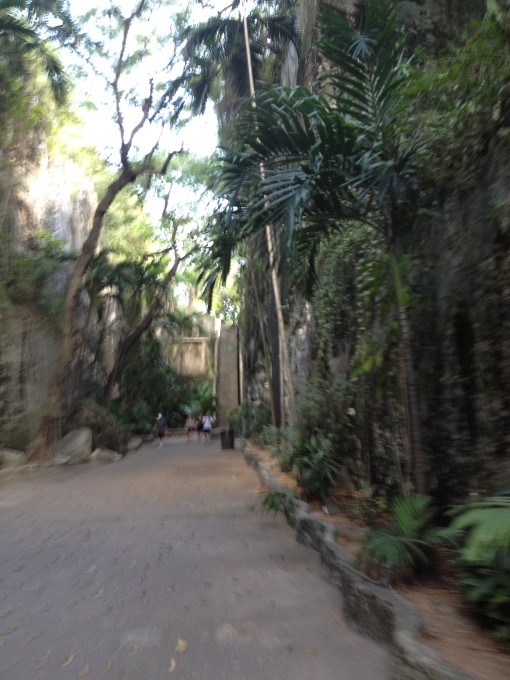 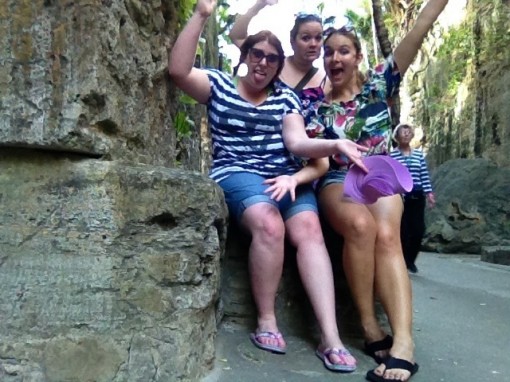 The climb to the top was not particularly comfortable for my cruise body, but absolutely worth it. 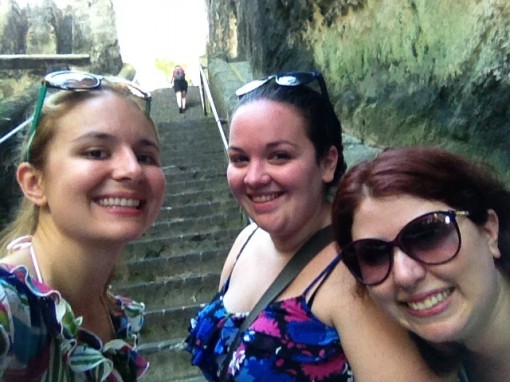 The top of the Queens Staircase was host to some gorgeous scenery as well as Fort Fincastle. 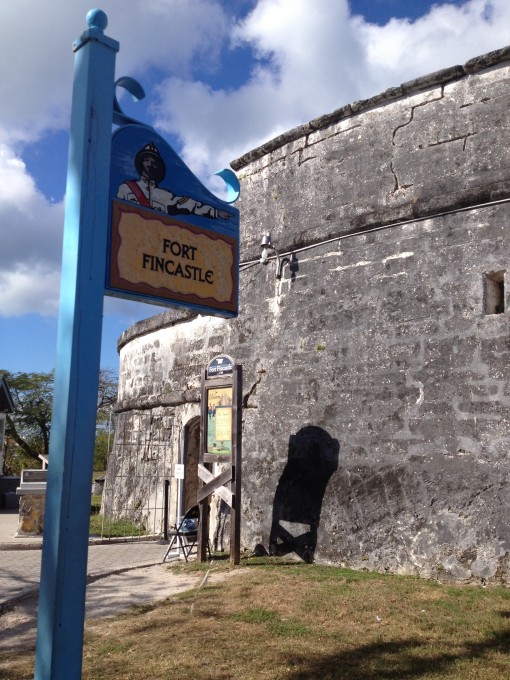 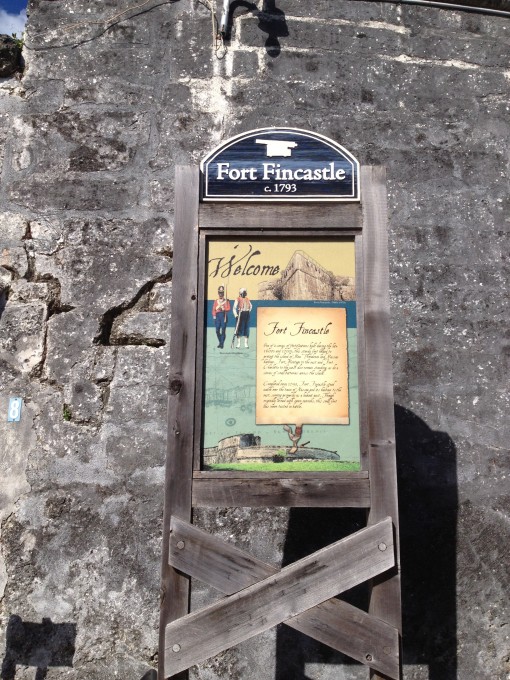 The Fort was small, and the tour rather uninformative, but the admission was only $1 and everything was largely unsupervised, which means you’re allowed to play with all the historic stuff. 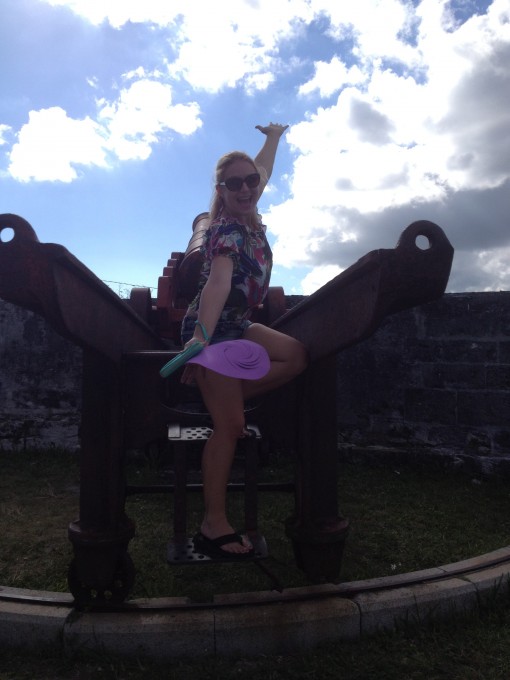 After our wonderful time with the freebies, staircase, and fort our day took a slight turn for the worse.  We stopped by a Dunkin’ Donuts that appeared to be some sort of American Embassy.  The building stood out as the newest and cleanest available and advertised free wifi, which was a welcome change to the $0.75/ minute wifi on the ship.  Mostly we stopped in for our best shot at a clean restroom, however, I felt I need to make a purchase and was intrigued by the heavily advertised Pumpkin White Chocolate Latte. As I made my order the two women behind the counter met me with a quizzical look.

“Okay, then I’ll just have the Brown Sugar Cinnamon Latte” I replied pointing to the large poster behind them.  The both slowly turned around, confused.

“Red velvet I guess.  How do I access your wifi?”

Who would have thought the most Americanized place in Nassau would also be the most frustrating? 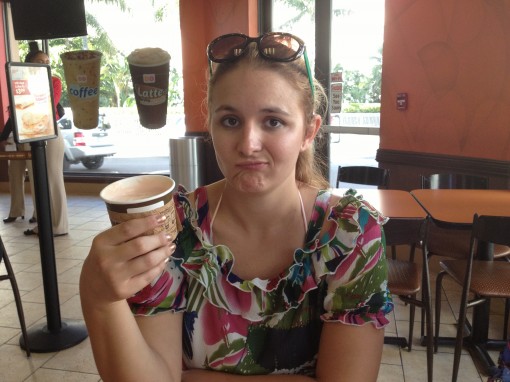 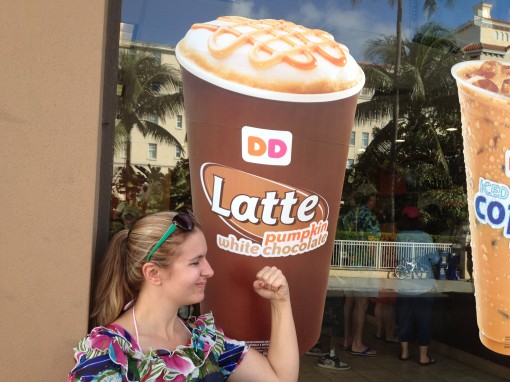 We headed back the ship defeated.  Back at the port we noticed a sign for a rum distillery with a free tour and samples!  We couldn’t end on this note, and this seemed a great way to turn it around.  We found some friendly Brits with bags from the distillery and asked them about it.  They said it was about a 10 minute walk from where we were.  At that, Bethany bowed out.  Then there were 2.

Tracy and I headed down a poorly marked route to the distillery, through a largely residential area that made us very happy that we were unmurderable.  We finally found the John Watling’s Distillery and it was truly an oasis, and apparently abandoned oasis. 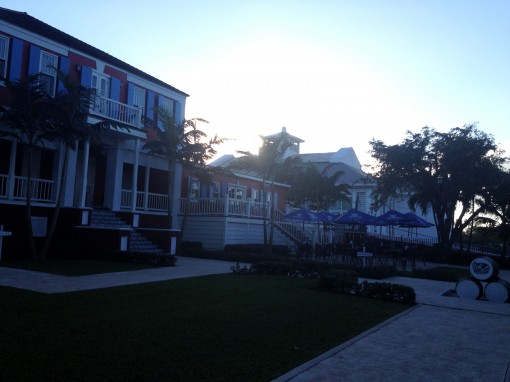 The only soul in sight was a security guard at the entrance, asleep with his feet propped up, while two roosters pecked around him.  We showed ourselves in and began to poke around.  We walked into a large plantation home and were met with a sign that read “self-guided tours” and an arrow pointing us further in.  As we were showing ourselves around the ground a voice came from behind. 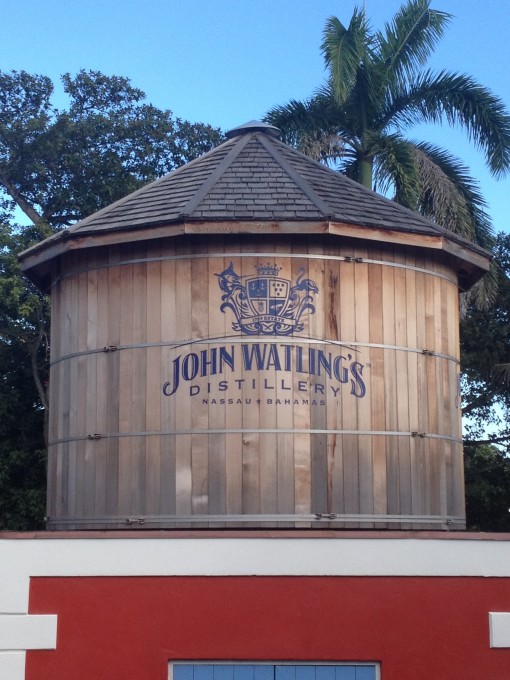 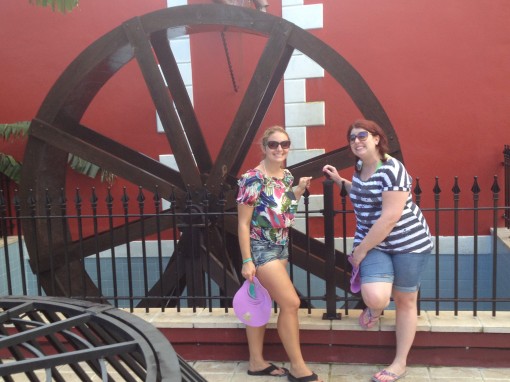 “Are you ladies here for the tour?”

“Oh, it said ‘self-guided tour’ inside so we thought we could just help ourselves.”

“Self-guided tours are for dudes!”

And that’s how me met Bryant and got a tour of the distillery! He showed us around, offered us samples, took pictures and left this wonderful message for our friends.

The distillery was very nice, and you can’t complain about a private tour.  It was definitely the best part of our Nassau day. 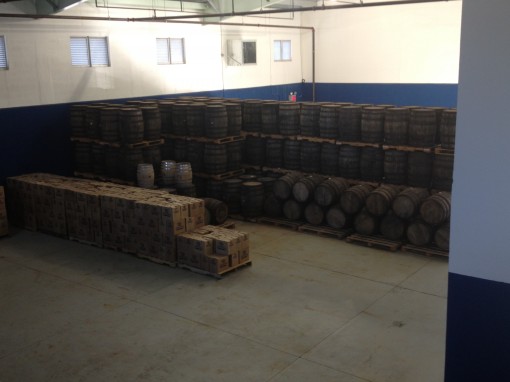 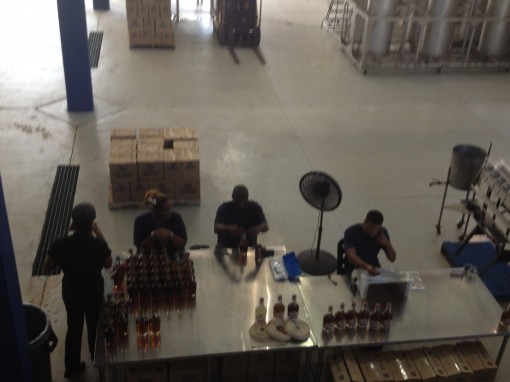 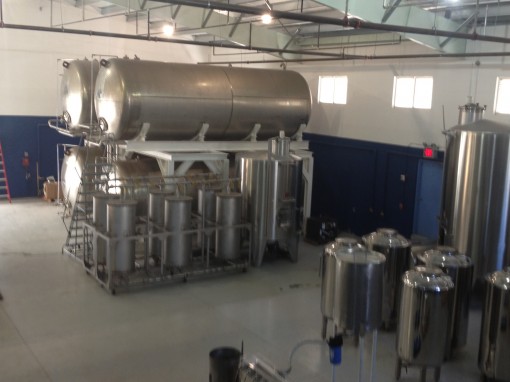 The best part of all was the bar at the end of the tour. 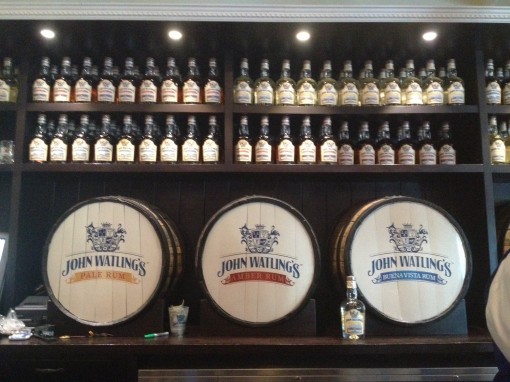 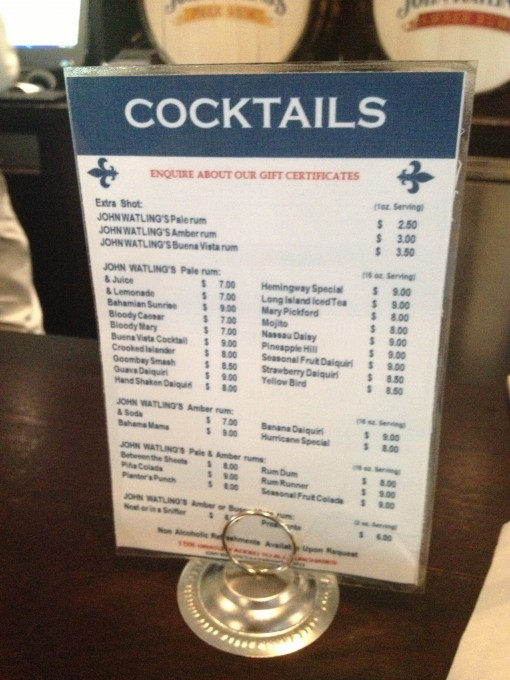 Here Uncle Will made us a mean and generously poured mojito. 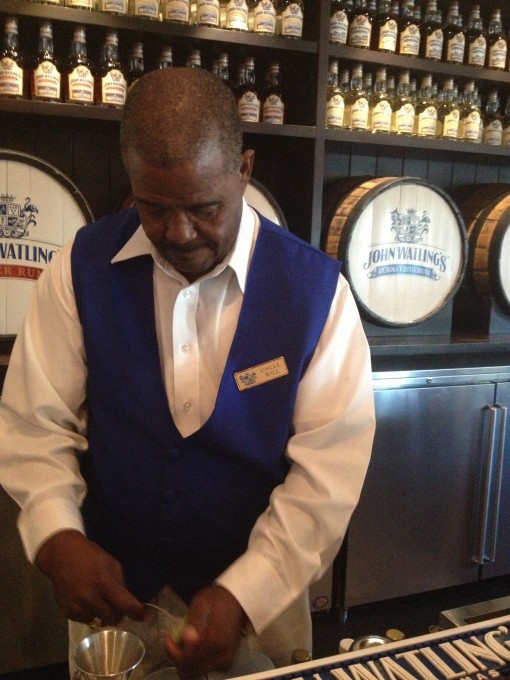 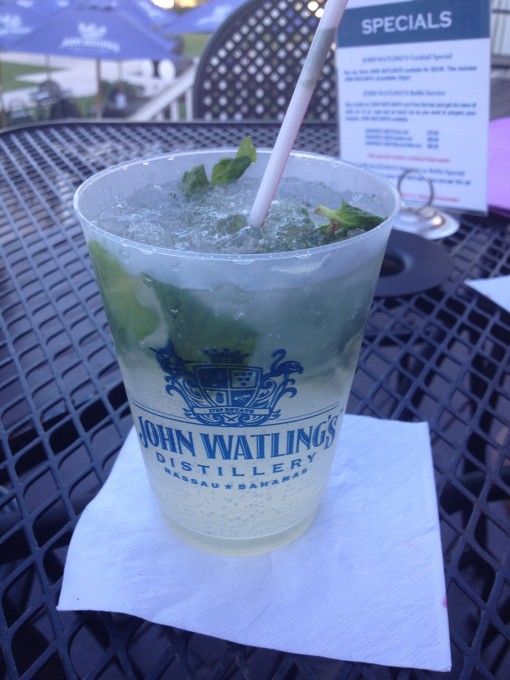 and we had a gorgeous patio to enjoy it on. 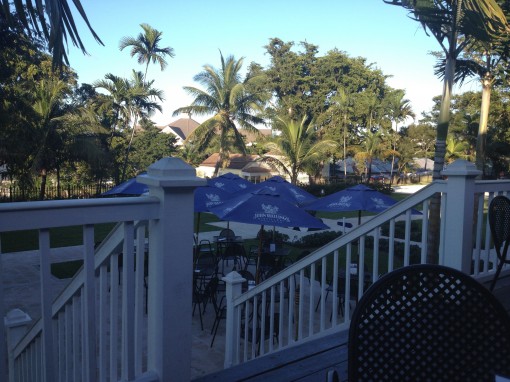 Unfortunately by this time it was time to head back to the boat.

I firmly believe that one can have a great time anywhere.  Nassau is a little rough around the edges sometimes, but I certainly think it is a worthwhile port call.  I had a great time, had some good drinks, and made some new friends.  I even have an open invitation to come back and “beat the town” with Bryant.

6 thoughts on “Why Get Off The Boat At Nassau?”