I recently met one of Key West’s most famous residents, Robert the Doll.  With my penchant for ghost stories, I don’t know how I’ve missed him on previous visits to Key West.  Now seems like a good time to feature him however, due to the proximity of Halloween, my continual avoidance of voo doo curses, and most importantly, Robert’s 110th birthday.

It was 110 years ago tomorrow (Oct. 25th) that Robert the Doll was given to 4 year old Robert Eugene Otto by a mistreated Bahamian servant of the family that reportedly practiced Santeria.  Robert named the doll after himself and later on went by the name Gene to avoid confusion. 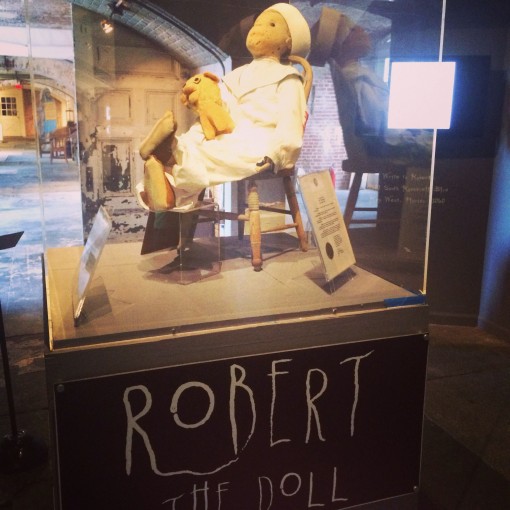 Gene and the doll were inseparable and were often over heard conversing in two different voices.  Robert even had a place at the dinner table.  For a while the family dismissed this as the wild imagination of a child, but as time went on and weird occurrences began around the house, they became concerned.  Household items would be found broken, rearranged, and upturned.  Servants would be found locked in closets.  Items would be found strewn about Gene’s room, and Gene’s answer would always be “Robert did it.”

Whether it was out of fear of Robert or for their son’s sanity, the Otto’s locked Robert away in an attic where he was forgotten for a while.

Years later, an adult Gene ended up moving back into his family’s Key West home after the death of his parents, this time with his new wife.  He found Robert in the attic, dusted him off, and they were once again inseparable.  Everything was as it had once been and Robert was up to his old mischief.  The only difference was that this time Gene was an adult and he had a wife that was appropriately concerned about her husbands unnatural attachment to a doll.  He also still blamed all the bizarre happenings around the house on Robert. 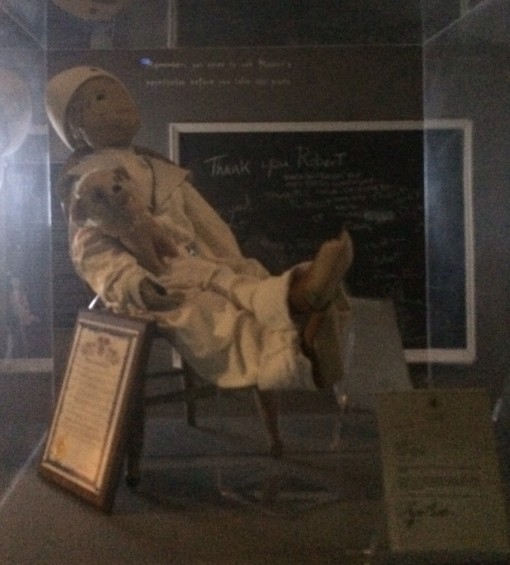 Now, most of this could be chalked up to Gene being a bit of a loon. So, here’s where the story gets especially interesting.  In 1974, Gene passed away and his wife either died or moved, no one seems to really know or care, at which point Robert the Doll was banished to the attic again.

Word had gotten out about Robert the Doll and passers by the empty house reported seeing Robert move from window to window or hearing a child’s laughter coming from the house.  It’s said that neighborhood children would cross the street so as not to walk in front of the house. 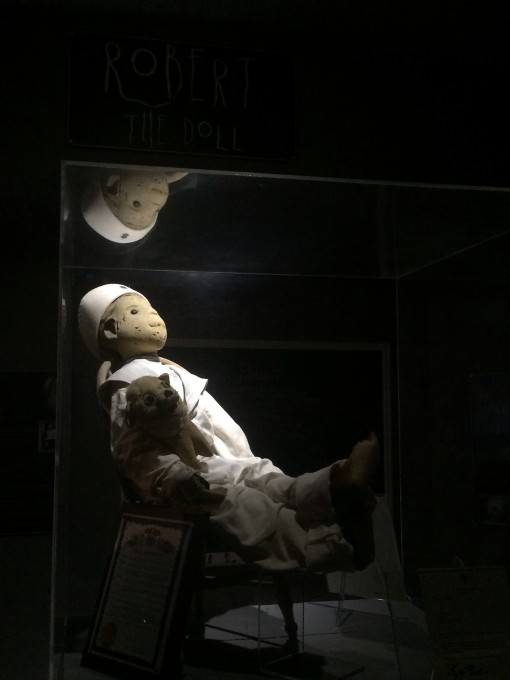 About a decade later, a new family moved in and found Robert the Doll in the attic and gave him to their 10 year old daughter to play with.  Robert began torturing the new owners.  They claimed he move around on his own, they would hear childish giggling, and even one night they woke up to Robert at the foot of their bed.  The daughter of this family is now 40 and still claims that Robert was alive and trying to kill her.

Robert the Doll now resides at the East Martello Museum, where he is apparently up to his old tricks.  Museum staff has reported all manner of disturbances.  Robert’s expression will change from a smile to a scowl.  Again, childish laughter can be heard throughout the museum.  It’s been said that he will change positions during the night and when the staff comes in the next morning his shoes will be covered in fresh dust.  Most notable though, he curses visitors to the museum that disrespect him. 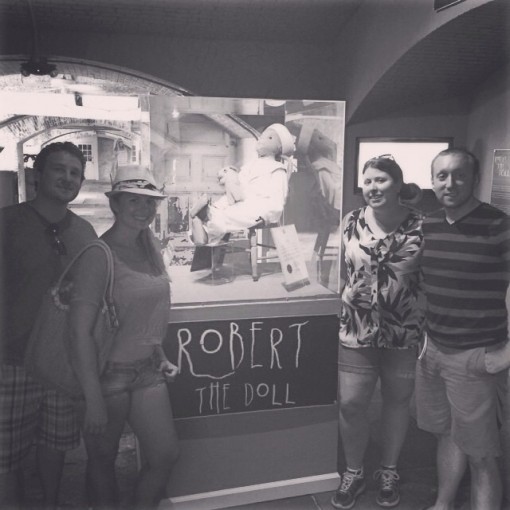 You can visit Robert the Doll during regular museum hours (9:30-4:40 everyday but Christmas).  Robert is certainly the museums main attraction, but they do have some other interesting artifacts and art pieces as well.  The museum does offer a staff guided tour, though I would probably skip it and just do self guided.  Our guide was fun, but pretty much just walked into rooms and told us what he saw.  Things like, “That’s a piano, I think it was from a shipwreck or something.” or “This is where nuns were.”   We were able to teach him something though (with the help of the internet). 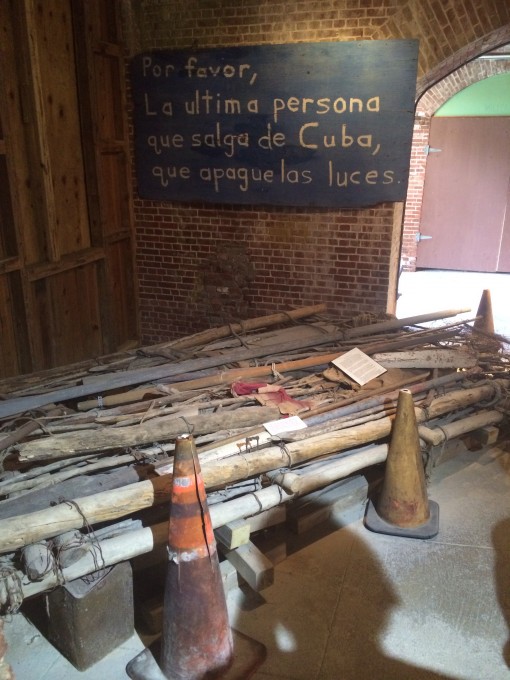 This is a raft that made it here from Cuba.  Our guide didn’t know what was said on the wall beside it.  It’s, “The last person to leave Cuba, please turn off the lights.”  So, now his tour will be that much better.  You’re welcome.  Also, pretty funny for Cuban refugees.

Anyway, after we were done with our “guided” tour we went back on our own to spend some quality time with Robert the Doll.  The museum staff has made it very clear that you must ask permission before every photo you take of Robert 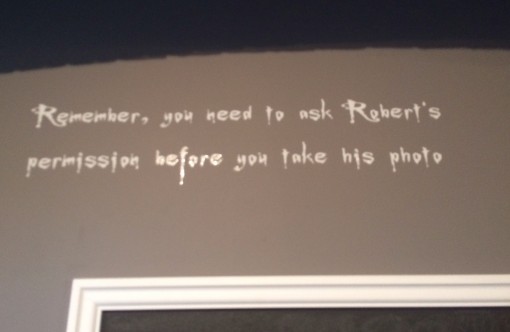 and there are TONS of letters displayed from people who didn’t.  These are a few of my favorites. 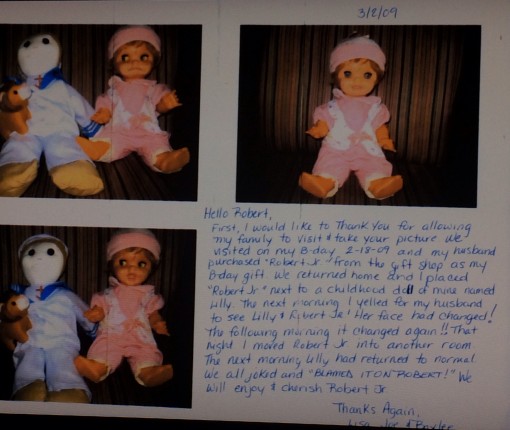 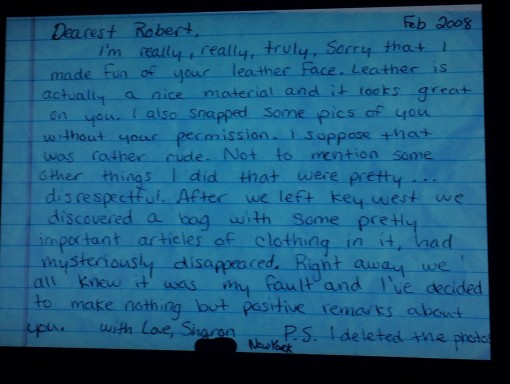 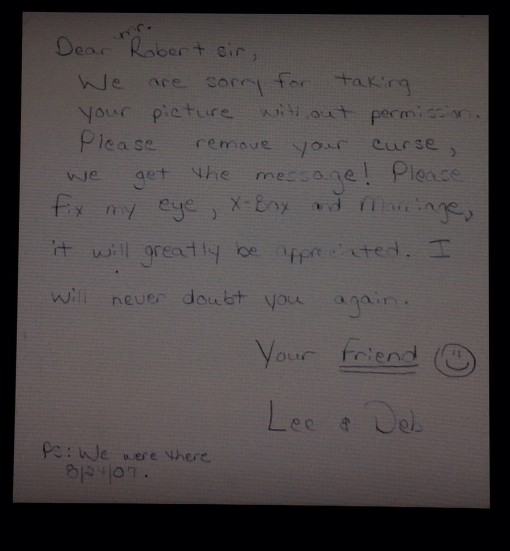 The last thing I need is a hundred year old curse on my hands, so I of course obliged and asked permission.

There is also a chalk board provided to thank Robert for his time. 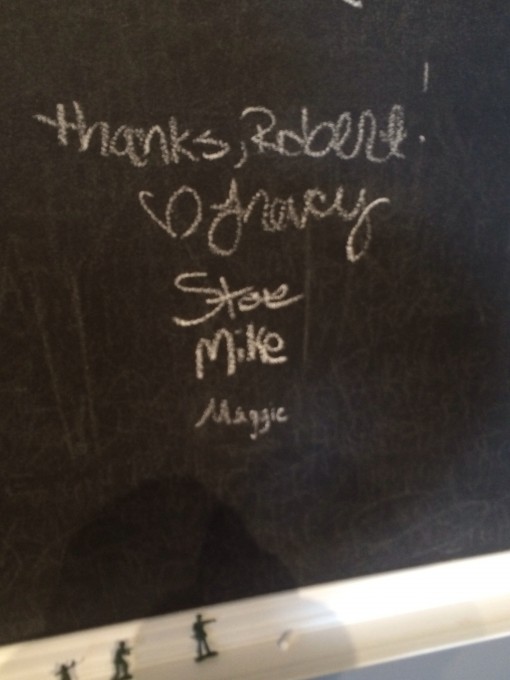 Now, if Robert the Doll isn’t creepy enough for you during the day, you can go visit him after dark on the Ghost and Gravestones Key West Frightseeing Tour.  Here you can board a “trolley of the doomed” and hear all sorts of sordid tales about life and death in Key West, but the highlight is a trip inside the East Martello Museum to see Robert the Doll after dark.  You are also given an EMF detector to walk around the Fort with! 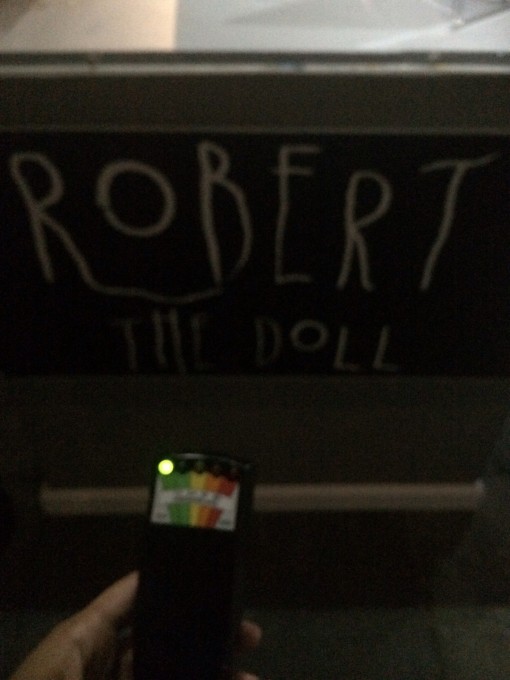 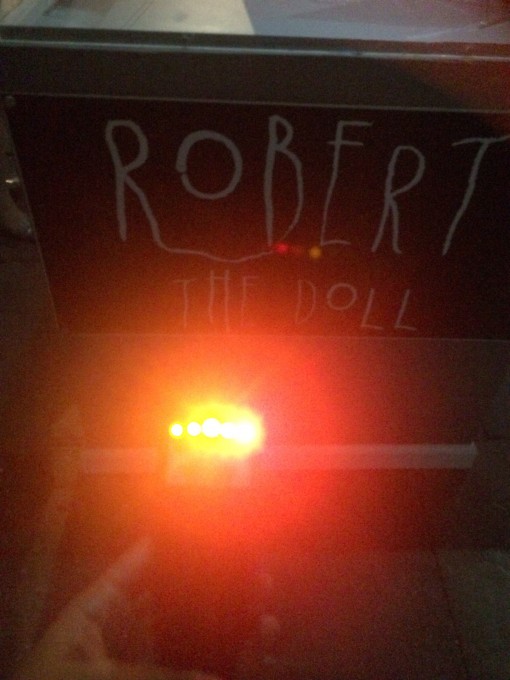 The EMF detector couldn’t have been reacting to my phone, because is stayed in the same spot the whole time.  I even alerted my friends when my lights started going off and one of them put their EMF detector by mine and it lit up as well, then  a few seconds later they were both back to normal at the same time.  I’m going to take it to mean that Robert was playing with us and not cursing us for eternity, but that’s probably open to interpretation.  He may have just been tired of seeing us twice in one day.

If you’re only planning on visit Robert the Doll once in Key West, I definitely recommend the Ghosts and Gravestones tour.  Our guide Abigail was fantastic. 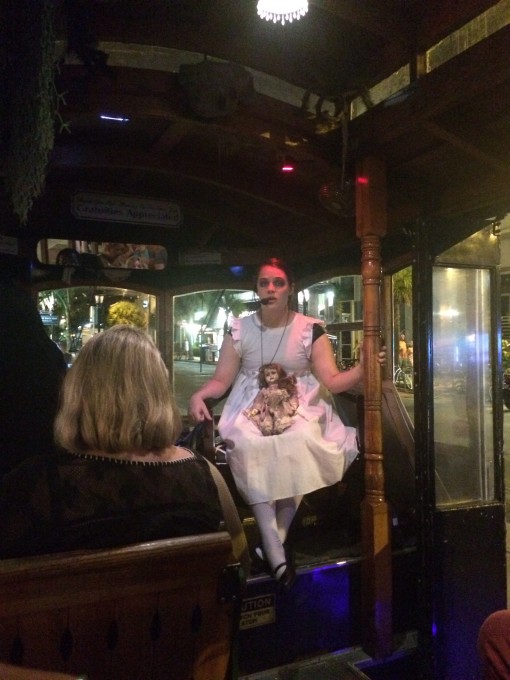 Normally I would prefer a walking tour, as that gives you more time to really explore the locations, but after all day walking around in the Key West humidity, a trolley was actually welcome.  You don’t get to explore much (outside of Robert the Doll), but you do get a lot of great stories and it’s easy to find the locations that interest you on your own later.   Certainly if you’re interested in visiting with Robert the Doll, the after hours tour and EMF detector are worth the price of the trolley ride. 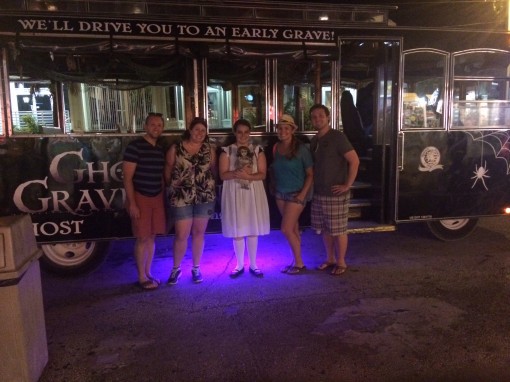 I would like to thank the Florida Keys News Bureau, Key West Attractions Association, and Ghost and Gravestones for a complimentary tour.  As always, all opinions are my own.

4 thoughts on “Robert The Doll; A Key West Legend”