Where I've Been Europe Croatia

If there is anything I love in this world, it’s quirky museums and other people’s dirty laundry and The Museum of Broken Relationships in Zagreb, Croatia has just that!  As you would imagine, the museum is dedicated to artifacts from love gone wrong.  People from all over the world donate mementos and tell the stories that go along with them.  Some are funny, some are heartbreaking, but all of them are fascinating.  What’s more fun than poking around in someone else’s pain? 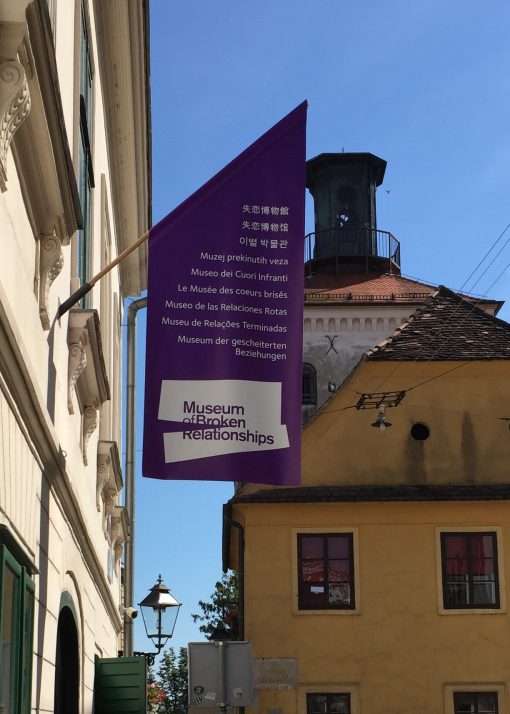 The museum describes it’s history and mission better than I ever could, 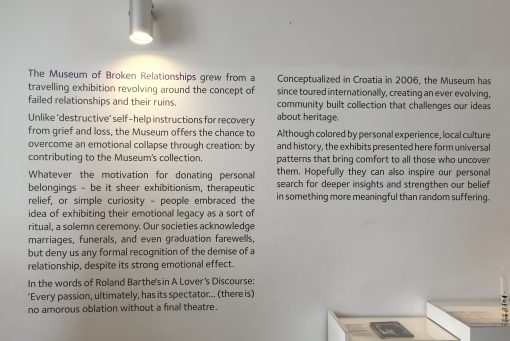 “The Museum of Broken Relationships grew from a traveling exhibition revolving around the concept of failed relationships and their ruins.

Unlike “destructive” self-help instructions for recovery from grief and loss, the Museum offers the chance to overcome and emotional collapse through creation by contributing to the Museum’s collection.

Whatever the motivation for donating personal belongings- be it sheer exhibitionism, therapeutic relief, or simple curiousity – people embraced the idea of exhibiting their emotional legacy as a sort of ritual, a solemn ceremony.  Our societies acknowledge marriages, funerals, and even graduation farewells, but deny us any formal recognition of the demise of a relationship, despite it’s strong emotional effect.

In the words of Roland Barthe’s in A Lover’s Discourse: “Every passion, ultimately, has it’s spectator… (there is) no amorous obligation without a final theatre.

Conceptualized in Croatia in 2006, the Museum has since toured internationally, creating an ever evolving, community built collection that challenges our ideas about heritage.

Although colored by personal experience, local culture, and history, the exhibits presented here form universal patterns that bring comfort to all those who uncover them.  Hopefully they can also inspire our personal search for deeper insights and strengthen our belief in something more meaningful than random suffering.”

Of course, the reason everyone goes to the Museum of Broken Relationships… the stories.  I’ve collected a few of my favorites. 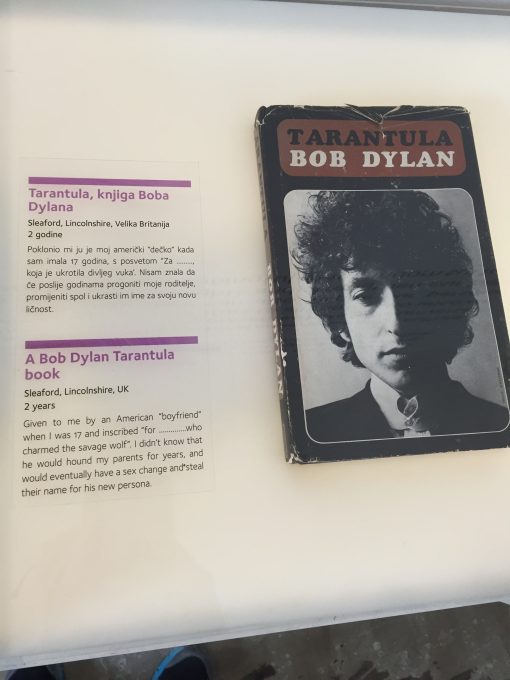 Given to me by an American “boyfriend” when I was 17 and inscribed “for………… who charmed the savage wolf”.  I didn’t know that he would hound my parents for years, and would eventually have a sex change and steal their names for his new persona.” 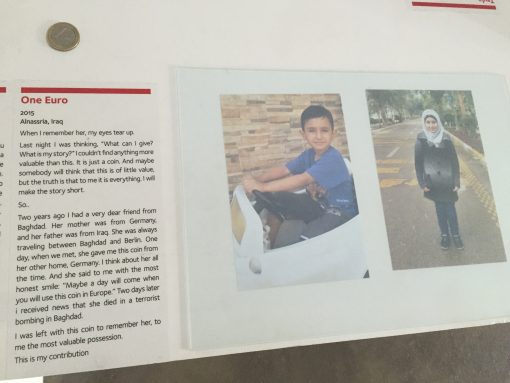 When I remember her my eyes tear up.

Last night I was thinking, “What can I give? What’s my story?” I couldn’t find anything more valuable than this.  It is just a coin, and maybe somebody will think that this is of little value, but the truth is that to me it is everything.  I will make the story short.

Two years ago I had a very dear friend from Baghdad.  Her mother was from Germany, and her father was from Iraq.  She was always traveling between Baghdad and Berlin.  One day, when we met, she gave me this coin from her other home, Germany.  I think about her all the time.  And she said to me with the most honest smile:  “Maybe a day will come when you will use this coin in Europe.”  Two days later I received news that she died in a terrorist bombing in Baghdad.

I was left with this coin to remember her, to me the most valuable possession.

This is my contribution.” 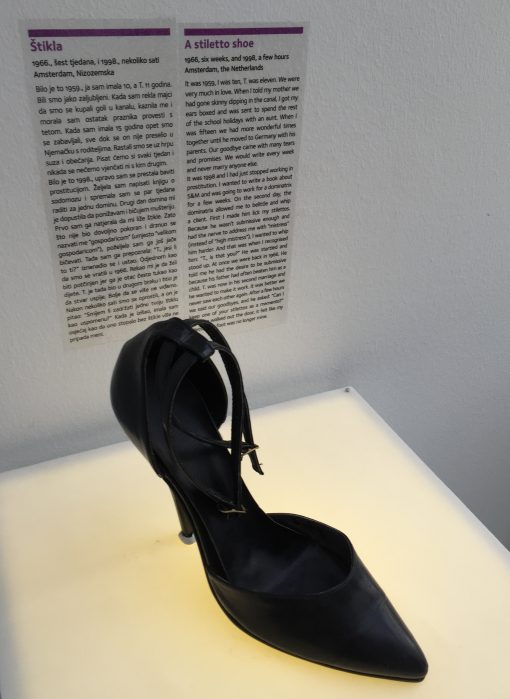 It was 1959, I was ten, T. was eleven.  We were very much in love.  When I told my mother we had gone skinny dipping in the canal, I got my ears boxed and was sent to spend the rest of the school holiday with an aunt.  When I was fifteen, we had more wonderful times together until he moved to Germany with his parents.  Our goodbye came with many tears and promises.  We would write every week and never marry anyone else.

Pretty good stuff right?!  Those are just a few of my favorites, but all of the stories are great and the museum is every bit as quirky and interesting as you would want it to be!  Of course, one of the best parts of any museum is the museum store, and The Museum of Broken Relationships in no different. 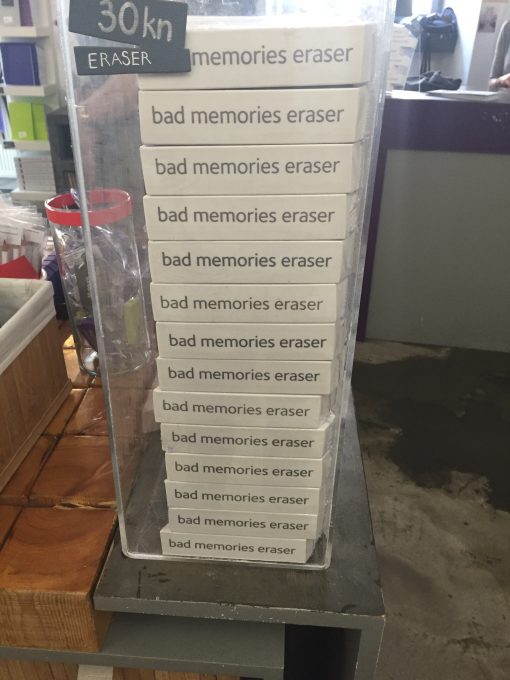 I had only one afternoon in Zagreb and I cannot thing of a better way to spend it!  Zagreb is a beautiful city and as much as I enjoyed walking around and taking in the sights, I have no regrets about spending some time inside getting to know a few strangers. 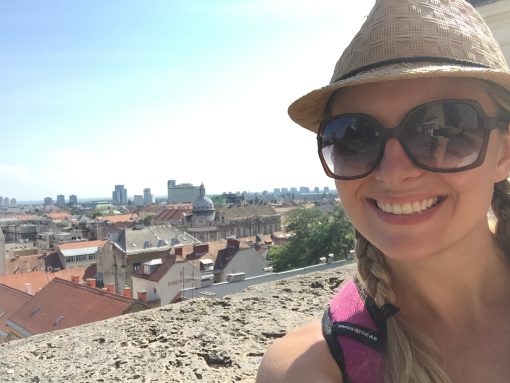 It seems appropriate to end with a few words etched on the wall at the Museum of Broken Relationships,

“To live in this world you must be able to do three things:

to love what is mortal;

to hold it against your bones knowing your own life depends on it;

and, when the time comes to let it go

From “In Blackwater Woods American Primitive by Mary Oliver”

November 1, 2016
Croatia Europe Where I've Been 17 comments Mags
← 5 Things You Must Do In Berlin Drinking Like Lincoln; 5 spots to experience Gettysburg’s Craft Beer, Wine, and Spirits →