Until a few months ago, the Denver Airport was the only place I’d actually been in Colorado (on layovers).  In April, I finally got to explore the rest of Denver, but revisiting the airport was still the thing I was most excited about.

If you are unfamiliar with the Denver Airport Conspiracy fear not, I was too until last year when a bartender I worked with made me watch 1000 you tube videos under the guise of working (I’ve since been relieved of that position).  I’ve wanted to go poking around there ever since. This conspiracy is rather dense and every time I delve into it I learn of a new element, so I’ll just cover what I’ve seen and heard.

The crux of the Denver Airport Conspiracy is that the airport was built atop secret underground bunkers meant to house the world’s elite in the instance of some sort of global disaster, natural or otherwise.  The story is that Denver had a perfectly functional, higher capacity airport closer to the city, and that this new airport was built in 1995 to distract from the real construction going on below.  There seems to be no argument as to the existence of these underground bunkers, but airport officials claim this is nothing more than storage.  This in itself would not be particularly peculiar, but coupled with the rest of the oddities at the airport, you can’t help but wonder.

There were some peculiar circumstances surrounding the construction however, it’s reported that there was no one foreman over the entire project, but rather several independent contractors working on pieces of the airport so that no one person knew the overall scope of the project.

Another interesting claim is that 5 buildings were constructed on the site, that were then found to have been “constructed improperly”, but rather than being torn down, they were simply buried and the airport was built on top of them, thus making the underground bunkers. 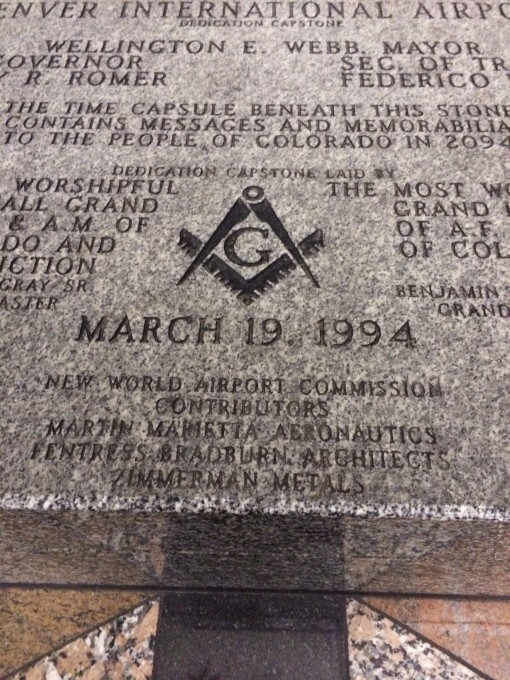 For most people, there are several pieces of evidence pointing to the New World Order.  No one knows where the funding for the new airport came from, though we do know that it came in $2 BILLION over budget.  The dedication corner stone mentions The New World Airport Commission as a contributor; an organization that has no record of existing before or since.  It also features masonic symbolism and a time capsule intended to be opened by the people of Colorado in the year 2094, perhaps after (or to cause) some catastrophe?

It is also worth noting that the central hub of the airport is called the Great Hall, another nod to the Masons as this is what they call their meeting halls. 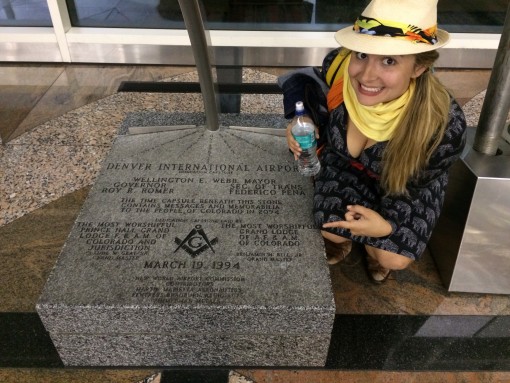 This on is my favorite.  There is a series of murals by artist Leo Tanguma, which are described innocently enough. 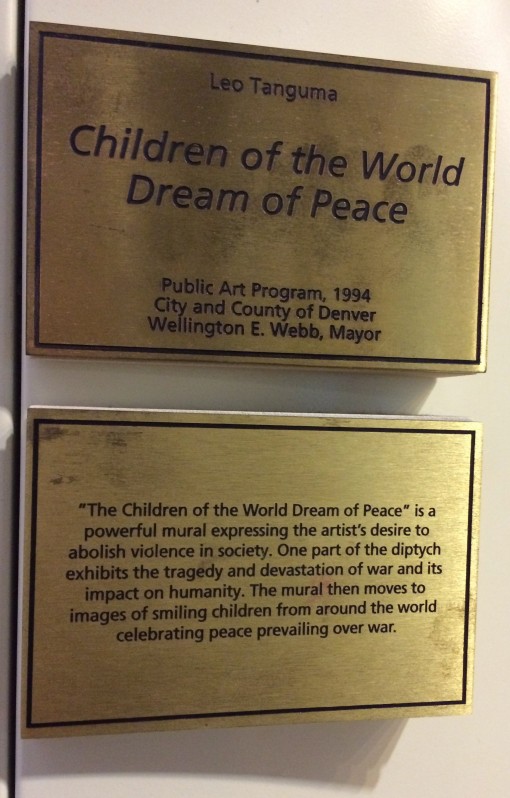 ‘The Children of the World Dream of Peace” is a powerful mural expressing the artist’s desire to abolish violence in society.  One part of the diptych exhibits the tragedy and devastation of war and its impact on humanity.  The mural then moves to images of smiling children from around the world celebrating peace prevailing over war.

Now, abolishing violence and peace prevailing over war seems like something we can all get behind.  What’s hard to stomach however, is how anyone thought the images of death by plague and genocide were appropriate airport art.

Conspiracy theorist make the claim that these murals depict a mass genocide of various species and humans of all races followed by a time of peace after the earth has been “cleansed”, likely referring to the survival of the New World Order alluded to in several of the other airport oddities.

Whether you believe the theories or not, what is obvious is that the murals depict mass extinction, burning cities, and caskets containing people of all races as children cry over their graves. 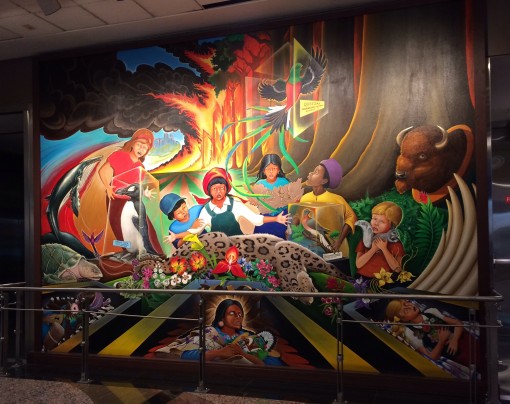 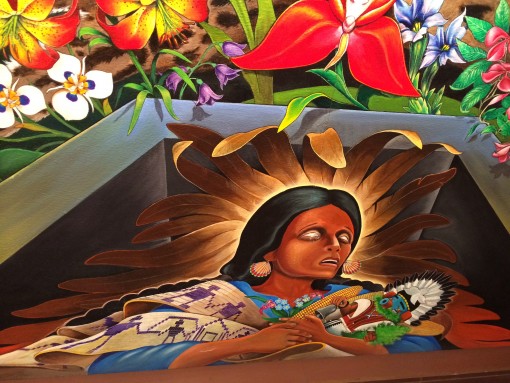 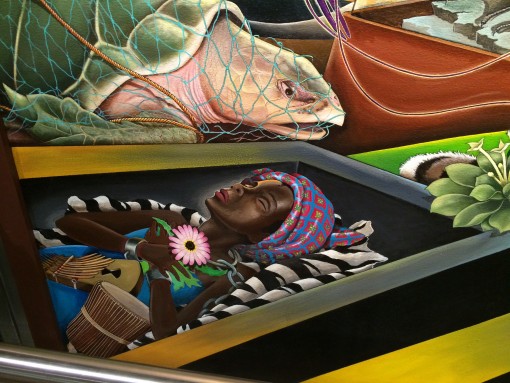 The second mural features a large man in a gas mask with a sword skewering the dove of peace and weeping mothers carrying dead babies.  A far cry from the paintings of sailboats and seascapes at most airports. 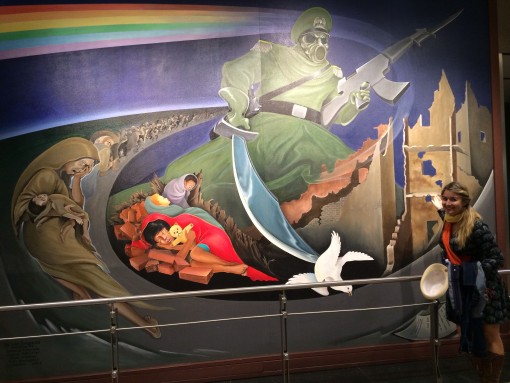 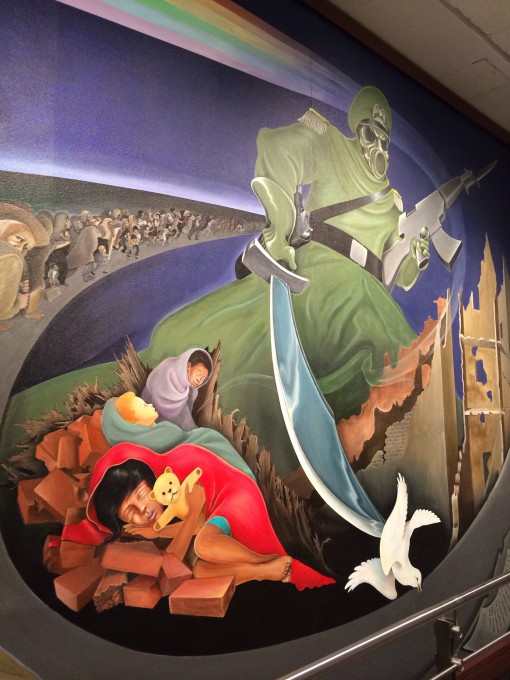 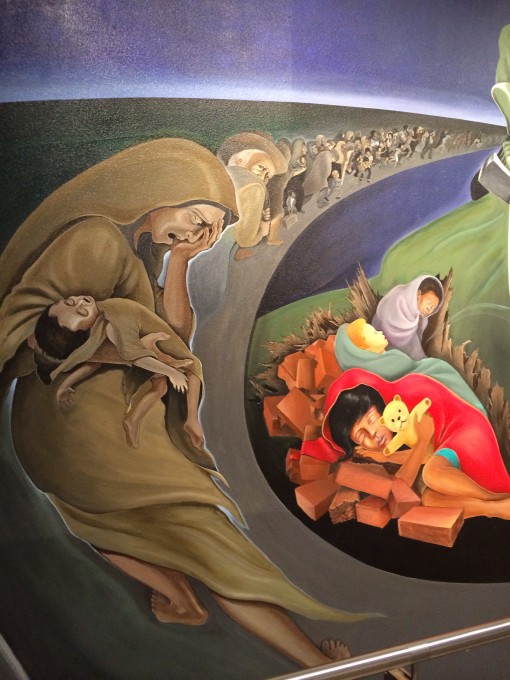 But all is well that ends well (if you’re part of the elite in the New World Order that is).  The last mural shows doves perched on the the slain gas mask guy as the children of the world turn in their weapons under a lovely rainbow. 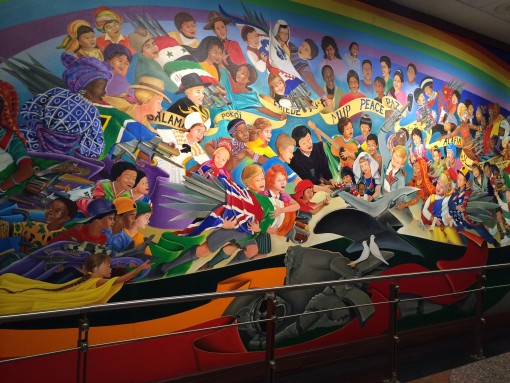 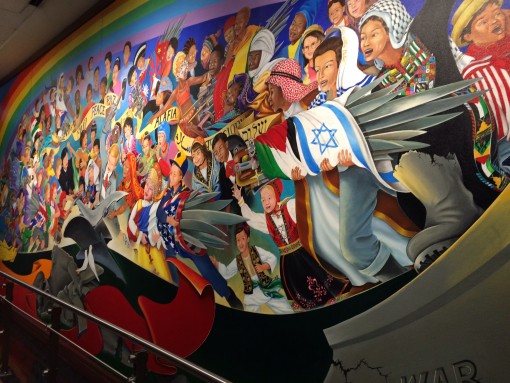 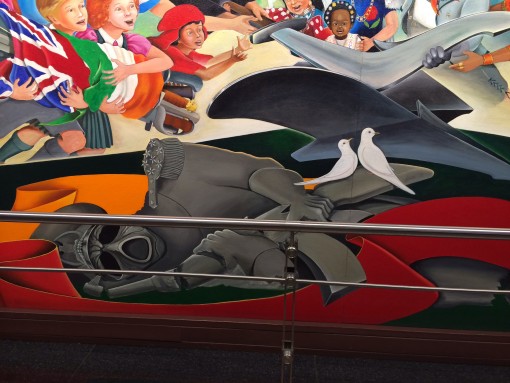 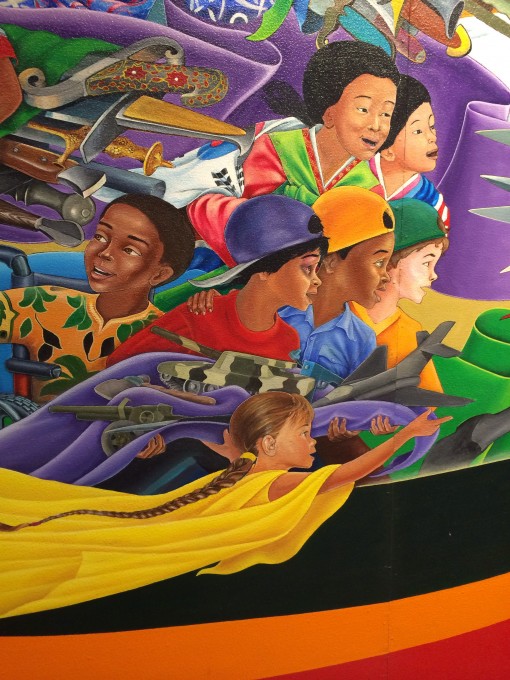 So if you’re inclined to believe the theories; humans really messed up the world, mass genocide, happily ever after.  Simple as that. 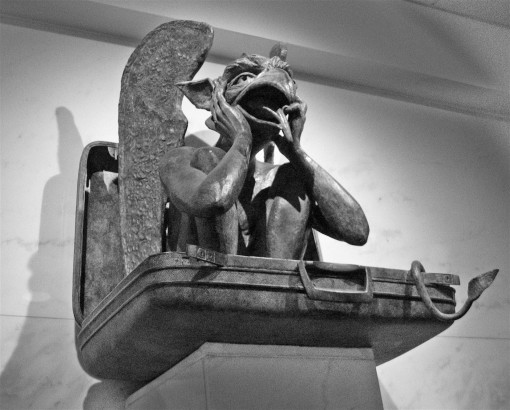 I had not heard about this until after I got home, so unfortunately I didn’t get to see this little guy first hand.  The jury seems to be out as to the meaning of this, but it’s certainly an odd piece. 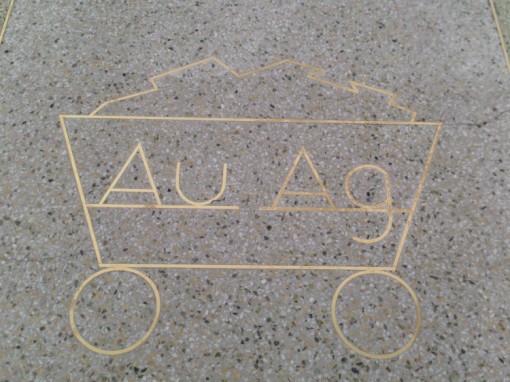 The inlay in the floor of the airport features what appears to be a mining cart with “Au Ag” on it.  These are of course the periodic table symbols for silver and gold, though some theorize it’s code for Australian Antigen.  Australian Antigen is a deadly strain of hepatitis that was reportedly discovered by one of the airports founders.  This inlay is conveniently located right in front of the painting of our charming gas mask friend. 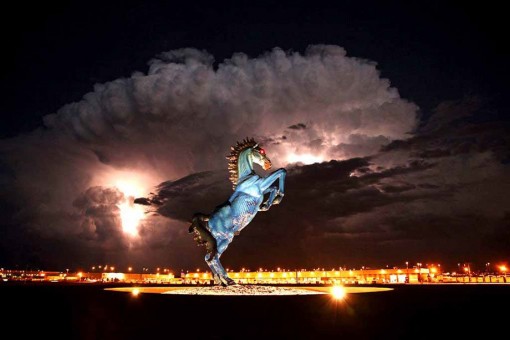 (photo by Eric Golub under the creative commons license)

This is another one that I unfortunately didn’t get a good look at as I was flying at night.  But this hellish horse stand outside the airport and is another example of unsettling airport art.  Some say this horse is cursed.  He has already taken one life, that of his creator during construction when the horse’s head fell on him. 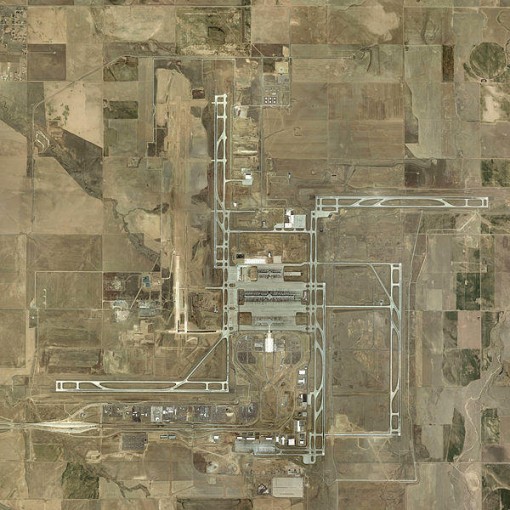 Some people have noted that the shape of the runways that of a swastika.  Personally, I think this takes a little imagination, but again, when all the piece are put together you can’t help but wonder. This adds to the theory that the bunker is for a New World Order or Neo-Nazi holding facility when the time comes. 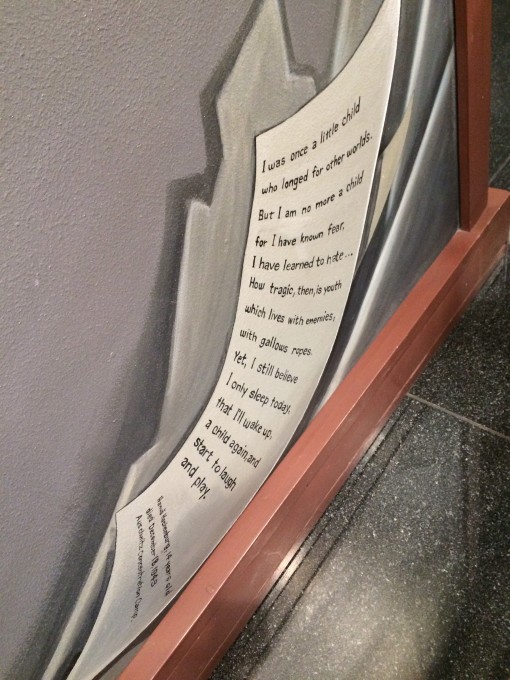 There are also many Nazi references in the art, like this poem written by a 14 year old who died at Auschwitz.

I was once a little child who longed for other worlds. But I am no more a child for I have known fear. I have learned to hate…. How tragic, then, is youth which lives with enemies, with gallows ropes. Yet, I still believe I only sleep today, that I’ll wake up, a child again, and start to laugh and play.

There are a few rumors flying around that are hard to pin down and find facts on, here are some of my favorites;

So the prevailing theories are that the airport is either set up as a concentration camp of sorts to eliminate the less desirable humans, creating a smaller community of the elite, controlled by one world government, The New World Order…. or that the airport is set up to house and protect the world elite after some sort of catastrophe (perhaps caused by the New World Order).

I don’t know exactly where I stand on the Denver airport conspiracy, but I do know that there seem to be a few too many clues to be merely coincidental.  Like so many of life’s mysteries, whether it’s true or not, it’s fun to speculate.

I look forward to the comments on this one.  Did I miss any of the clues or theories?  Are there any other similar conspiracy sights I need to visit?  Most importantly, what the heck is going on at the Denver Airport?

54 thoughts on “WTF is Going on at The Denver Airport?”